When we were expecting Eldest, we decided the theme of his nursery would be Noah’s Ark. My mother-in-law gave us a wooden ark that could hold beanie babies. My Mom made this beautiful quilt.

To be honest, I’m not sure why we chose Noah’s Ark as a theme. I wasn’t at a point in my faith where I thought about God’s covenant of life with creation and how that promise included our child-to-be. Maybe the choice was made subliminally. Noah’s Ark and the rainbow are on the cover of many children’s Bibles and there is no shortage of happy ark-animal-rainbow themed merchandise in baby stores. After all, the bright array of rainbow colors is gender neutral.

As happy as all of these images are, we know there is a lot more to Noah and his Ark than the rainbow. The ark became necessary because of God’s grief over the depravity of humankind — a grief so great that led God to regret the very creation they had brought forth.

Desiring to reverse the violence that had overtaken creation, God decided to do a reset by flooding the earth and destroying all living things. Lucky Noah and his family spent a year quarantined in their floating zoo. I can’t imagine their overwhelming isolation and despair. Everyone and everything they knew was gone. We don’t have any record that God spoke to Noah during this time. I would wonder if God forgot about me, a speck in the midst of a vast ocean. Morale must have been low.

Finally, after 190 days we’re told: “God remembered Noah, all those alive, and all the animals with him in the ark.” Even as God sent a wind over the waters as at the first creation, it was still 150 more days before the waters receded enough for the ark to become lodged on a mountain. And another 40 days (plus seven) before the dove returned with the olive leaf. Two weeks later they exited the ark and found the world empty.

So far, this doesn’t seem much of a child’s story. I’m sure Noah was overjoyed to step foot on dry land, but that step led to an ocean’s worth of “what now?”

It seems here, God remembers Noah again. Right before our passage, Noah makes an offering to God with some of the animals from the ark. God accepts the offering and tells Noah and family to go forth and multiply. I wonder what Noah and his family thought of that. Adam and Eve hadn’t known anyone but God and the animals. They had no expectation of what it meant to “go forth and multiply.”

But Noah had known what the world looked like with its generations and generations of human multiplying. He knew of buildings and farming. He had seen towns and marketplaces. But now, it was as if he was returning home after a natural disaster finding that everything he had known was gone.

We don’t think about it, but Noah probably would have suffered from PTSD. He watched people and animals drown, communities destroyed, and was left as good as dead for a year. Imagine how triggering dark clouds on the horizon and the smell of rain would be for the rest of his life. How would he know he wouldn’t be the victim next time? Why “go forth and multiply” if it were all just going to happen again?

God recognizes the destruction of the flood and the fragile humanity that remains and responds by setting up a covenant between God’s self and every living being on earth. Noah didn’t negotiate this, God self-initiates it, self-limiting God’s action in the future. Universal, the covenant is also unconditional. There is no requirement that humans go and sin no more or the living things multiply appropriately. There isn’t even a requirement that we remember what caused the flood and God’s mercy in ending it.

The symbol of the covenant is a bow in the sky. We call it a rainbow, but the Hebrew word is just bow. Everywhere else in Scripture it is translated as a regular bow that uses arrows. Because this bow is in the sky, and we usually see it after it rains, we named it a rainbow.

This symbol wasn’t actually for us. If we read closely, God creates it as their own reminder not to destroy the world with a flood. This should be sobering for us. Even after the flood, we didn’t really change. God knows we will be a source of grief again. We only need to read a few more verses in this chapter to see that sin still lives, even in this re-creation.

In this time after the flood, God decides to retreat from destruction and hang their bow in the sky to rest. It is a symbol of peace and God’s decision not to destroy again. Instead of a weapon, it is now an object of protection. Theologian Jane Ann Ferguson says this:

The creatures made in God’s image may always resist God. Yet God lays down God’s weapons against creation, against humankind. God put the undrawn bow in the clouds as a personal reminder “never again” to destroy creation with a flood.[2]

But this “never again” covenant creates the opportunity for a new relationship and new ways for God to meet us. We see this in Jesus’ baptism. In his baptism, God claims Jesus as beloved — and then sends him out into the world. It is the same for us. God meets with us in our baptism, coming to us before we can ever come to God. When we pray over the waters of baptism, we make reference to the flood. As we come up out of the baptismal waters, we find the grace of Jesus a continuation of God’s covenant after the flood. Jesus is the promise of salvation rather than destruction, abundance over scarcity.

Jesus came into the world that was created through him with no conditions: For unto us a child is born.[2] God meets us where we are, coming to us in the incarnation of Jesus. Throughout Jesus’ ministry, he met us again and again in our sick, marginalized, sinful, forgotten, hurt, and lonely places. The “never again” of God’s covenant after the flood created a relationship of “again and again.”

#Jesus came into the world that was created through him with no conditions: For unto us a child is born. God meets us where we are, coming to us in the incarnation of Jesus. #covenant #love Click To Tweet 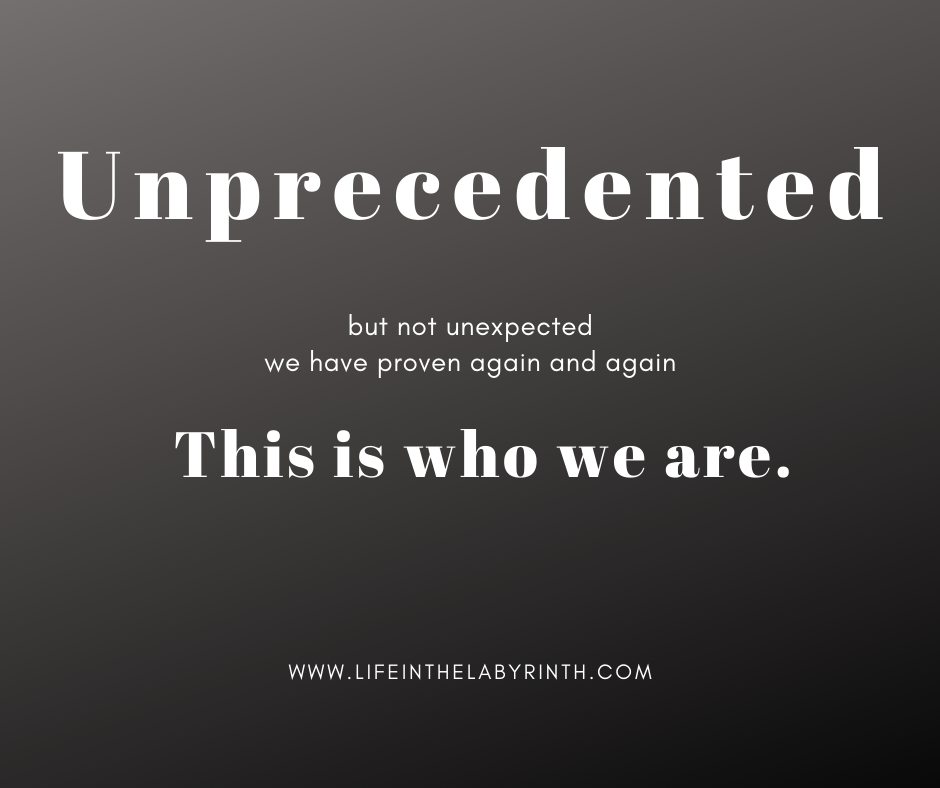