Thus says the LORD of hosts, the God of Israel, to all the exiles whom I have sent into exile from Jerusalem to Babylon: Build houses and live in them; plant gardens and eat what they produce. Take wives and have sons and daughters; take wives for your sons, and give your daughters in marriage, that they may bear sons and daughters; multiply there, and do not decrease.

For thus says the LORD of hosts, the God of Israel: Do not let the prophets and the diviners who are among you deceive you, and do not listen to the dreams that they dream, for it is a lie that they are prophesying to you in my name; I did not send them, says the LORD. For thus says the LORD: Only when Babylon’s seventy years are completed will I visit you, and I will fulfill to you my promise and bring you back to this place. For surely I know the plans I have for you, says the LORD, plans for your welfare and not for harm, to give you a future with hope. – Jeremiah 29:4-11 (NRSV)

God’s word to the captives in Babylon was twofold. The exiles are to get on with life. They aren’t supposed to wait out captivity but to invest in the place they are. In fact, their own well-being is tied to the well-being of Babylon. God tells them to pray for the peace and prosperity of their enemies. Can we imagine how unwelcome this word would have been? How could God be asking them to seek the good of those who destroyed the Temple?

God’s plan also goes beyond their present circumstances. God knows where they are right now, but God also knows where they are going. Paul tells us in his letter to the Romans: We know that God works all things together for good for the ones who love God, for those who are called according to God’s purpose.[1]

I don’t think the exiles wanted to hear that their well-being was tied to the well-being of the Babylonians. They would have wanted to turn inward and isolate themselves from the community around them. They would prefer to think their situation was very temporary. However, they will call Babylon home for a while.

This is the place where gardens will be planted, whose harvest they will eat from next year and the years after that. Here is where they will grow old and see their grandchildren born. Some of them will die and be buried here.

This is their life, and life cannot be lived in isolation. For the exiles to thrive, they must be part of the larger community — and that larger community must thrive as well. They’re all in it together.

Sometimes it’s really hard to see the good of where we are right now. And it’s really tempting to wait it out, nursing our grief and anger. But that’s not what God calls us to do. The captives weren’t just supposed to survive in Babylon — God wanted them to thrive. God wanted them to continue to be God’s people because they are going to be here for a while.

We’re going to be here for a while.

Before the election, half this country felt as though it were in exile in Babylon. After the election, the same is true. We are a divided country, a division that has ended relationships and will strain the Thanksgiving table in a few weeks. I think there are many people who will happily play the COVID card to avoid this annual get together.

We might stay home this Thanksgiving for many reasons, but like the Hebrews in Babylon, God doesn’t want us to just wait it out. All of our many feelings are what they are, and we can easily fall into the temptation to just wait it out for our whole life. To sit in exile with those who are like us. But if we do, we would miss out on God’s plans for us individually and together. And God’s plans are really too good to give them up just because we sometimes find ourselves in Babylon.

In the Common English Bible, the introduction for Jeremiah 29 is “Disturbing Hope: Settle Down in Babylon.” In seminary, they didn’t teach us that hope is disturbing. In fact, hope is to be the opposite. Hope is what we turn to in disturbing times. What, then, are we to do when hope itself is disturbing?

For one, we remember that our hope is in Christ — and that we live into this hope together.

As disturbing as the details might be, God’s message is one of hope. It is a reminder that life goes on even when it may seem like the world is coming to an end. Paul reminds us that though there are many of us, we are one body in Christ, and individually we belong to each other.[2]

Even if we vote differently.

The welfare of Republicans and Democrats are bound together. We talk about red states and blue states, but the well-being of our people, our country, America’s voice in the world isn’t segregated by yard signs or state lines. We can use rhetoric to distinguish between us and them, but it doesn’t change the reality that we’re all in this together.

Last week, the psalmist asked us if we believe in God’s power and sovereignty. Jeremiah asks the same. If we do, then we also believe God’s promises — including that God seeks our good as we seek the good of the community around us. For some this might be disturbing hope. Regardless, this is the hope God calls us to. Today, tomorrow, the next four years, and all the years after that belong to all of us. The welfare of one is the welfare of all. To the best of our ability, we live at peace with all people, regardless of party affiliation.

Today, tomorrow, the next four years, and all the years after that belong to all of us. The welfare of one is the welfare of all. To the best of our ability, we live at peace with all people, regardless of party affiliation. #hope… Click To Tweet

God’s plans for us are for our well-being and a future with a hope. The question is whether we will choose to build homes and plant gardens or sit by the waters and weep. Amen. 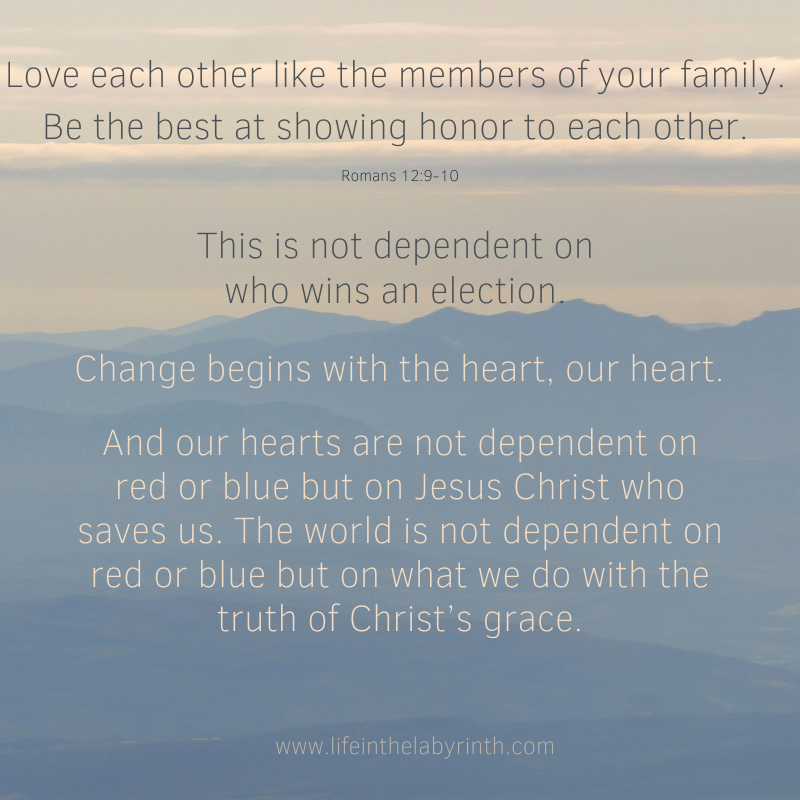 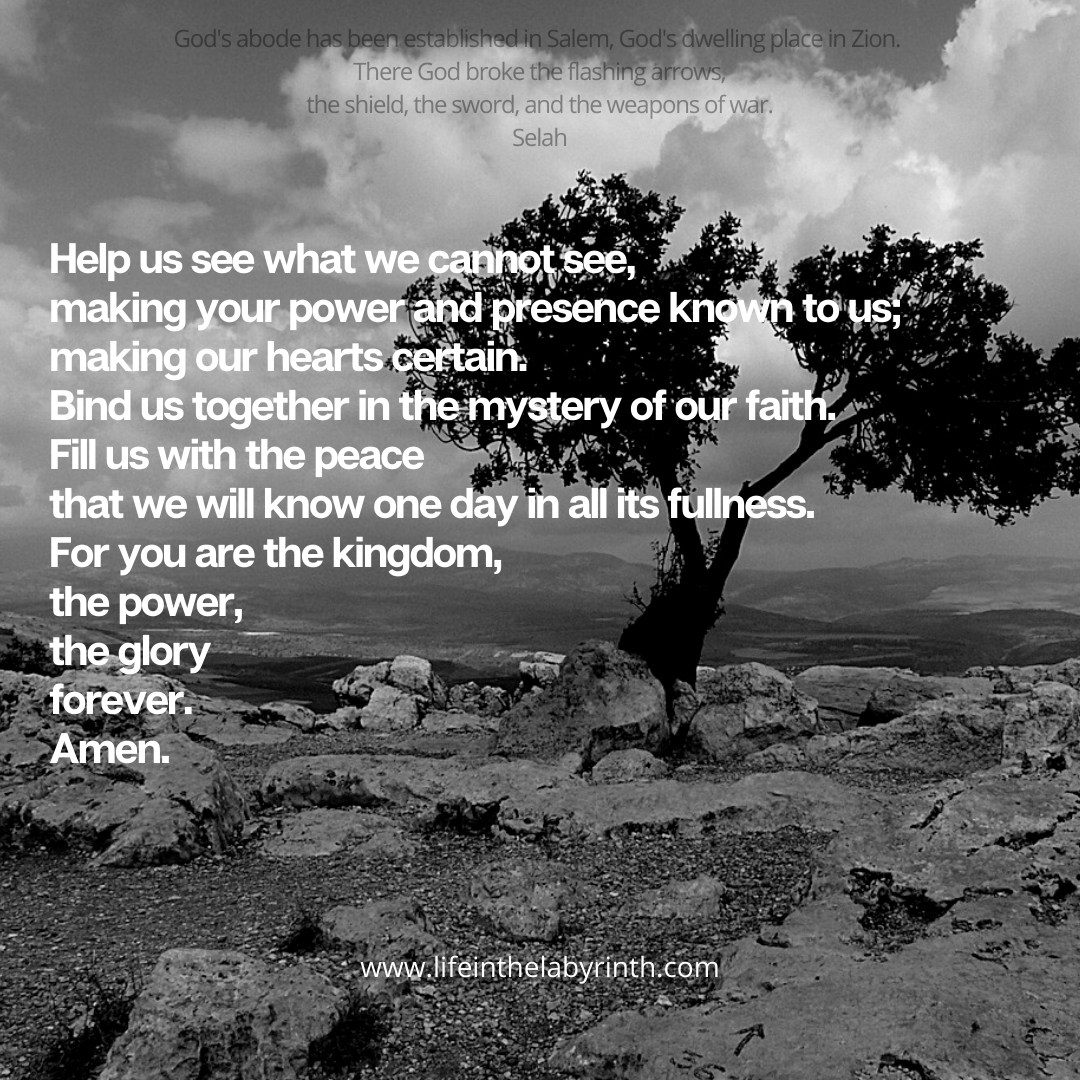 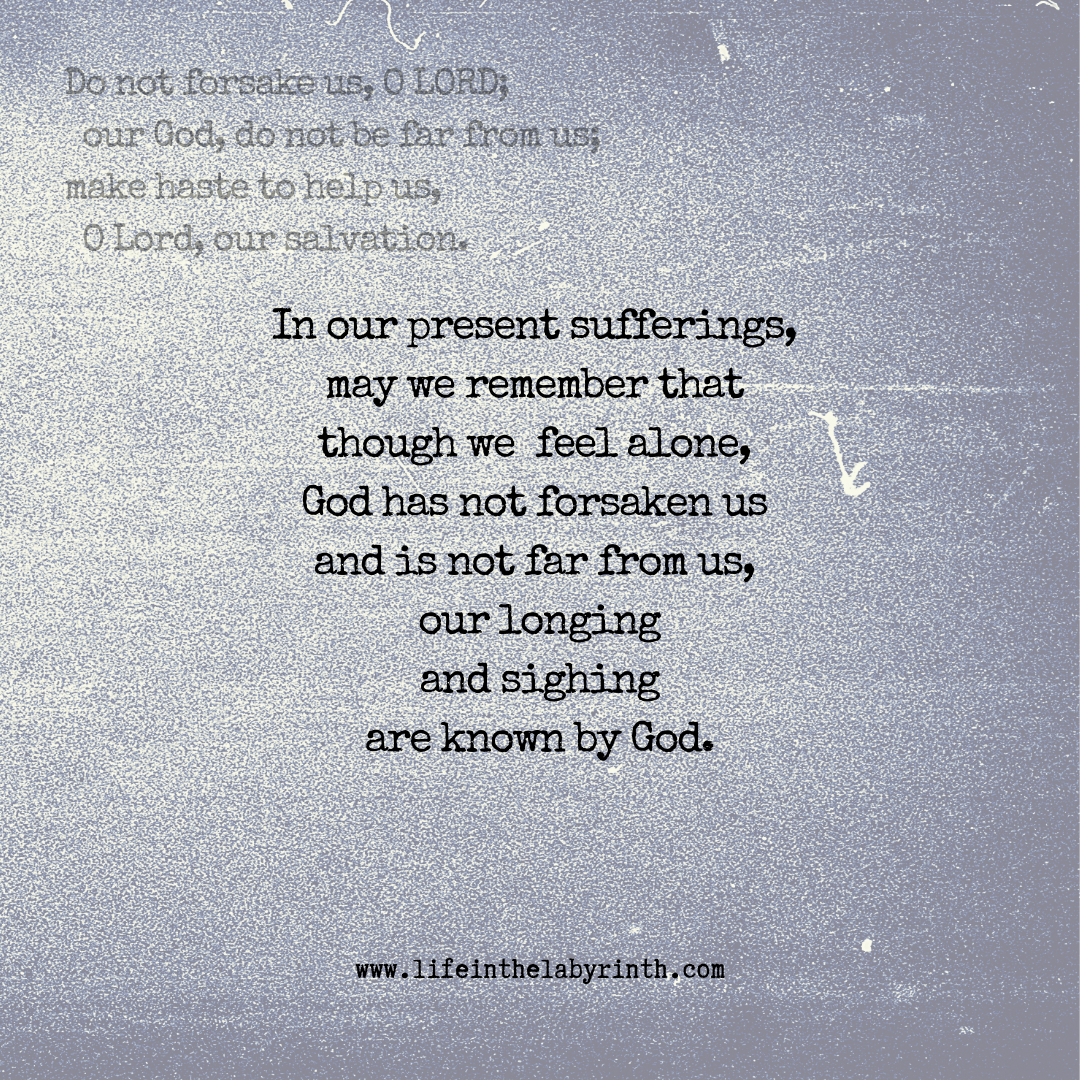